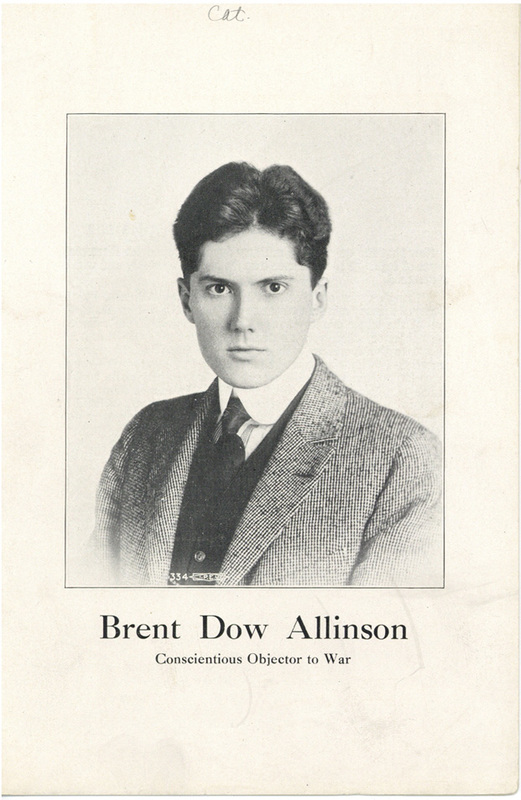 Was arrested for not registering for the draft in Chicago (IL), even though he’d been called to be in Washington by the State Dept. etc.; named on Judge Advocate General's card file entitled CONSCIENTIOUS OBJECTOR -- DESERTION: "Accused, being ordered to report to Camp Grant, wired his local board for transportation from Washington (DC) to that place, and remained in Washington, where he was apprehended. On his trial he stated that he had made up his mind to remain in Washington until transportation was furnished or until he was arrested. Conviction for desertion sustained. 7/18/1918"; courts-martial trial #116224; was sentenced to 15 [25?] years of hard labor - sentence reduced to 4 years to expire on July 15, 1921; in April 1918 he printed in the newspapers “One Word More” relating his refusal to take up arms against the youth of Germany; was imprisoned from July 30, 1918 to 1921; his mother, Mrs. Brent Allinson Sr., was part of Dec. 1918 delegation that visited Secretary of War Baker to plead for release of C.O.s in prison at Ft. Leavenworth; later became a lecturer and writer on the USSR; was let go from his teaching post in 1931 in Cleveland (OH) and an investigation was demanded by labor unions and liberals from the area.